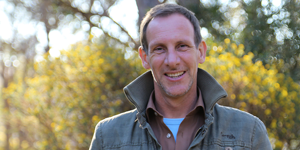 Ian graduated from Sydney College of the Arts with a B.A. in Visual Communications. He works as a freelance director for advertising, film, television and theatre. He has studied directing, acting and scriptwriting – and gathered extensive international experience in Sydney, London, Barcelona, Vienna, Hamburg and Berlin.
Ian has directed two documentaries: one about David Byrne, and another about the Berlin Video Art Festival. He has also written and directed the stage play “The Garden Fence” – which he also turned into a Theater-Film, and directed a theatre production of “The Open Relationship”. His first short film “Desiderata” was a finalist in the “Black Nail Film Festival, and his latest short “Atados” has just been selected into the Budapest Short Film Festival “Busho”.