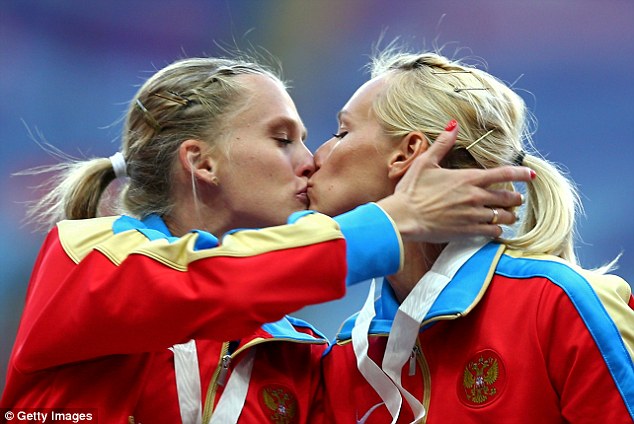 Ksenia Ryzhova and Yulia Gushchina kiss each other after receiving their gold medals.

Ksenia Ryzhova and Yulia Gushchina, who kissed each other on the lips after receiving their gold medals, said they were offended by any suggestion they were more than just good friends and complained the furore had spoilt their victory celebrations.

The pair were half of the Russian 4×400 women’s relay quartet who swept to victory in front of a packed Luzhniki stadium in Moscow on Saturday, defeating the American favourites in one of the highlights of the championships.

Some activists saw the kiss as a brazen show of defiance in support of gays and lesbians and against President Vladimir Putin after the championships were shadowed throughout by controversy over the law.

But Ryzhova, 26, insisted on Tuesday that she was married and made clear she was none too happy that people now suspected that she and Gushchina might be having a lesbian relationship.

“Yesterday, I was telephoned 20 times by various publications and instead of congratulating me they decided to insult me with these questions,” she fumed, quoted by the ITAR-TASS news agency.

“Myself and Yulia are both married and we are not having any kind of relationship,” she added, saying the two were very good friends after having trained together for eight years.

“It was a storm of emotions (after winning). And if at that moment we touched lips… I don’t know in whose fantasy this all gets thought up.

“This insults not just us but our trainers,” she added.

Gushchina, 30, expressed similar astonishment, saying she “could not understand how such a thing could come into people’s heads”.

“When Ksenia sent me the link to the photograph and the news reports I could not believe my eyes! These victories are hard to come by and we were happy. I don’t understand how everything could be tarnished in such a way.”

Gushchina said she was completely unaware of the controversy surrounding the law. “I simply did not hear or read about it because I was totally focused on my performance at the championships.”

The law, which outlaws the dissemination of homosexual “propaganda” to minors, was signed by Putin in June and has prompted calls for a boycott of the 2014 Winter Olympics in Sochi.

The controversy was intensified at the World Championships when gold medal-winning star Russian pole vaulter Yelena Isinbayeva backed the law and said “we just live with boys with women, women with boys.”

She also branded Swedish high-jumper Emma Green-Tregaro as “disrespectful” for painting her nails in the rainbow colours of gay rights.

The stance of Isinbayeva – who later said she may have been misunderstood and was against anti-gay discrimination – has received widespread support among Russian media and sports officials.

“It’s madness,” Russia’s chief athletics coach Valentin Maslakov told the Sovietsky Sport daily. “What did she say? She gave her opinion. And Western journalists – if we can call them journalists – immediately decided to make a story about nothing.”

The Russian Orthodox Church, which takes a hard line against homosexuality, also waded into the debate to support Isinbayeva and accuse Western media of bias.

“Some global media are stubbornly trying to create a picture that distorts reality,” Moscow Patriarchate spokesman Vladimir Legoida was quoted as saying by Russian news agencies.

Valentin Balakhnichev, the head of the Russian athletics federation who was among few Russian officials to criticise Isinbayeva for her comments, said it was time for everyone to calm down.

“I’m very upset by all the furore that has sprung up around Russia and the law. I ask everyone to stop and take it easy. Not one participant in Moscow experienced pressure because of their beliefs.” – Sapa-AFP