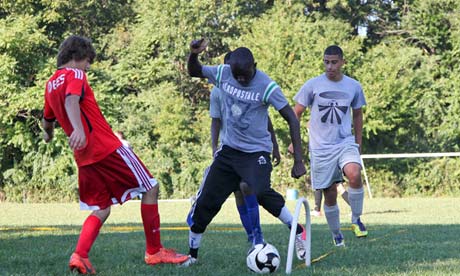 Homophobia in school can put gay students off sport for life, according to research by the National Union of Students (NUS).

By the time they get to college or university 34.6% of lesbian, gay, bisexual and transgender (LGBT) students said they were prepared to take part in team sports while 14.3% said that homophobia had put them off.

The culture around sport was blamed by 46.8% as the reason why they avoided sport while 41.9% said they had been put off by a negative experience at school.

There were 62.2% of LGBT students who had no problems with being open about their sexual orientation to their team-mates and coaches. Most of the 17.1% who kept quiet said it was simply because it was no one else’s business and irrelevant.

The fear that coming out to team-mates might trigger verbal or physical abuse was the reason given by 20.5% of student sports people for keeping quiet.

Sports facilities and teams should be more welcoming to students of all sexualities, the NUS report – Out in Sport – concludes.

Some 845 LGBT students were interviewed.

The report is backed by Gareth Thomas, the former British and Irish Lions captain, who announced he was gay in December 2009 and ended his marriage.

He says: “Attitudes have changed and the time is right for sport to start accepting openly gay people in the same way other areas of society have in recent years.”

Cricketer Steven Davies, who publicly outed himself last year, added that concealing the truth from his colleagues had affected relationships in the England dressing room.

In backing the report’s findings, he noted there is “room for improvement and positive practices that can make a very real difference to participation.”

Most people have a positive experience but he adds: “Too many who don’t participate in sport find the culture around sport alienating or unwelcoming, and many had negative experiences at school or experienced discrimination which put them off participating.”