Posted by Mike Florio on October 24, 2012, 3:38 PM EDT on profootballtalk.nbcsports.com 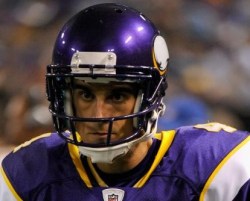 Vikings punter Chris Kluwe isn’t gay. But if he were, we suspect he’d gladly announce it.

He’d do it because, in his mind, people are people and they should be who they are, and the rest of us should accept it. But there would be a collateral benefit, in Kluwe’s opinion.

“The first gay athlete to come out will have endorsement deals the likes of which you’ve never seen,” Kluwe told Bob Costas on Tuesday’s Costas Tonight on NBC Sports Network. “Think about Gatorade, think about Nike, think about those huge companies that want to stamp their brand, their logo on this generation’s Jackie Robinson. You’re telling me that’s not the biggest marketing opportunity in 50 years? I mean, it’s huge.”

Kluwe, who recently debated a chair on the topic of same-sex marriage, thinks the NFL is much closer to being ready to accept a gay player than it was when he arrived. “When I first got in the league, you could definitely tell the older guys, the seven- and eight-year vets, they’d grown up in the ’80s and ’90s and that influenced their way of thinking and the way they acted towards each other,” Kluwe told Costas. “Now that I’m one of the seven- and eight-year vets, I look at the rookies coming in and it fills me with hope that these guys, they just, they don’t really care about what other people do with their lives because it doesn’t affect them. They realize that other people should be free to live their own lives, you know, should be free to get married to who they want because at the end of the day, they’re allowed to get married to whoever they want. So you know, I’m hopeful for the future and hopefully we can dispel this stereotype of the NFL being this macho, close-minded culture.”

When it happens, it will be a big deal for the player’s team — for a little while.

“I think it’s something that will receive media attention for probably a good week and a half, two weeks, but it will die down because people will realize it doesn’t matter what your sexuality is when you’re out on the field on Sunday,” Kluwe said. “It matters can you play football? Can you help us win football games? And at the end of the day, it doesn’t matter what you’re sexuality is. So hopefully we’ll be able to do our part to create a more welcoming culture so that someone feels comfortable in coming out and one day people will be able to be who they are.”

It’s a simple yet eloquent vision. People will be able to be who they are. Every sports team, company, and institution should aspire to that standard.