Gays in sports: On the field — and in the closet

Published by the LA Times, written by Wade DavisJanuary 13, 2013 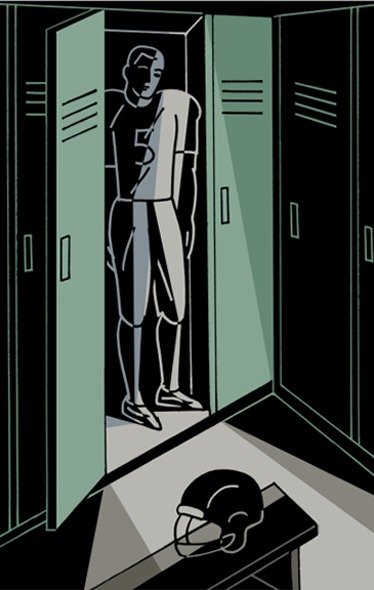 When I was 7 years old, my friends and I would play football in my backyard for hours, often with my mother watching through the kitchen window. One of the games we played was called “smear the queer.” At the time I didn’t know what “queer” meant. I only knew if you were brave enough to pick up the ball, you were “the queer” and would get creamed.

As I got older, I learned what that term meant, and then, in high school, I realized that I was gay. But that image of how “the queer” got “smeared” stayed with me. I ultimately realized my goal of becoming a professional football player, but being open about my sexuality while I was a player seemed far too dangerous to consider.

Recently, in a television interview, LZ Granderson, a journalist who has been honored for his efforts to combat homophobia in sports, called closeted gay professional athletes “chickens.” He’s not alone in demanding that athletes and other public figures divulge their sexual orientation and other aspects of their personal lives. But as someone who was closeted during my time in the NFL, I’d suggest it’s not always that simple.

There is currently a movement to make it safer for athletes to be open about their sexuality. I’ve gladly and wholeheartedly lent my voice to this work and will continue to do so. But I think every athlete is entitled to make a personal decision about whether or not to come out.

Coming out, or as I like to say, “inviting in,” is an individual process that requires a level of safety and security. In women’s sports, a number of gay athletes have disclosed their sexual orientation, including tennis champion Amelie Mauresmo, basketball great Sheryl Swoopes and soccer starMegan Rapinoe. It was interesting how little fallout there was from those announcements. But I suspect that women’s sports fans are more accepting, in part because of misguided societal notions about femininity and masculinity.

I don’t believe another athlete would try to harm a gay male athlete, but professional sports is still full of people happy to express their disapproval of homosexuality, and coming out requires a supportive environment.

Dallas Mavericks owner Mark Cuban was cavalier in an interview several years ago with a reporter in which he predicted what would happen if an active gay professional athlete were to go public. “From a marketing perspective, if you’re a player who happens to be gay and you want to be incredibly rich, then you should come out, because it would be the best thing that ever happened to you from a marketing and an endorsement perspective.”

That kind of speculation is cheap, but it it’s not so easy to prove. Moreover, the idea that money or post-career fame should be the motivation for an athlete to come out is misguided. Any athlete who takes that step should do it because it is good for him or her personally. A second consideration might be that the revelation would be good for society and good for sports. Going public primarily for financial gain could well lead to disappointment, and it would certainly rob the movement of heart and truth.

There is a lot of talk about how gay athletes need a Jackie Robinson to break down the barriers. But let’s remember thatBranch Rickey, the legendary Brooklyn Dodgers executive who signed Robinson, didn’t do it solely to improve race relations. Rickey believed that signing Robinson would bring money and welcome attention to the organization. ManagerLeo Durocher said it best: “He can make us all rich. And if any of you cannot use the money, I will see that you are all traded.”

I understand the hope that some brave athlete in one of the “manly” sports will come out and that this will transform sports culture, redefine our notion of masculinity and inspire millions of gay athletes battling the perception that gay men can’t play sports. But that’s a lot of hope to hang on a single act.

Transformation is likely to happen more slowly, and it’s important that during that process, advocates of equality don’t create their own form of oppression by bullying or calling out gay athletes who have chosen not to go public about their sexuality.

The reason I came out and joined this movement was to advocate for all athletes, including those who choose to remain silent. Before judging them harshly, try walking a mile in their cleats.

Wade Davis is a speaker, writer and educator. He played for the Tennessee Titans, the Washington Redskins and the Seattle Seahawks, and two teams within the NFL Europe league.