Robbie Rogers, 25, a Mater Dei High graduate who has played in MLS and for U.S. national team, says in blog post that he is gay and is ‘stepping away’ from soccer. 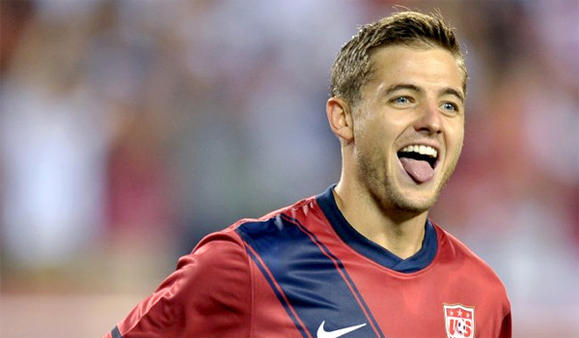 By Kevin Baxter
February 15, 2013, 4:00 p.m.
Robbie Rogers said he had to choose between being a soccer player or being himself.

He ultimately chose to be himself, stepping away from his sport Friday in a powerful blog post in which he revealed he is gay.

“I always thought I could hide this secret,” wrote Rogers, 25, a former Mater Dei High standout who played five seasons in Major League Soccer and had 18 appearances with the U.S. national team.

“Football was my escape, my purpose, my identity. Football hid my secret, gave me more joy than I could ever have imagined.”

But, he concluded, “I realized I could only truly enjoy my life once I was honest. . . . My secret is gone, I am a free man, I can move on and live my life as my creator intended.”

Rogers did not use the word “retirement” in his seven-paragraph announcement, instead saying, “Now is my time to step away. It’s time to discover myself away from football.”

Rogers’ career has been in free-fall since he left MLS’ Columbus Crew in 2011, the year he earned his last cap with the national team.

Troubled by nagging injuries, he was most recently playing for Stevenage of League One, the third tier of English soccer. And in his blog Rogers suggested his decline on the field was influenced by the emotional toll of trying to hide his homosexuality — although in Columbus, at least, that was said to be something of an open secret.

“You hear from athletes all the time that performance suffers from living in the closet,” said journalist Cyd Zeigler, co-founder of the gay sports website Outsports.com. “I’d love to see him try again. It might be a mistake for him to stop now.

“There’s a great chance that he will . . . have a clear head and be able to focus on the sport in a way he hasn’t been able to in his adult life.”

No active athlete in a major professional U.S. team sport has come out as gay. But Rogers was being lauded for his courage on social media Friday.

“Brave men like you will make it so that one day there’s no need for an announcement. That day can’t arrive soon enough,” tweeted Eddie Pope, a U.S. veteran of three World Cups and an executive with the MLS players’ union.