Questions have swirled this week about the sexuality of NFL prospect and Internet hoax victim Manti Te’o. Audie Cornish talks with sportswriter Stefan Fatsis about the controversy around Te’o and how other professional sports have reacted to gay players in the locker room. 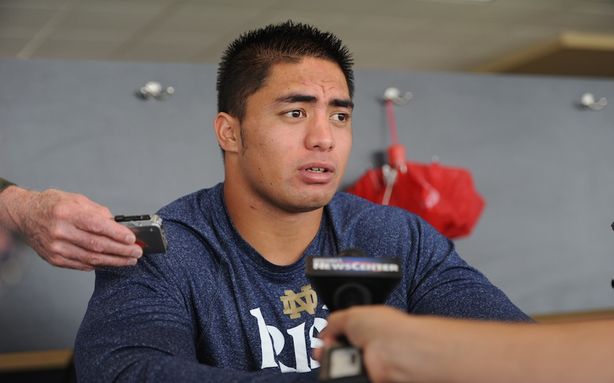 Copyright © 2013 NPR. For personal, noncommercial use only. See Terms of Use. For other uses, prior permission required.

It’s no secret that the atmosphere in pro sports for gay athletes, especially men, isn’t always a comfortable one. This week came another story on that topic: a report that an NFL team asked college players about their sexual orientation when they were auditioning for the league. The NFL says it’s investigating. And for more on this, sportswriter Stefan Fatsis joins us, as he does most Fridays. Hi there, Stefan.

CORNISH: So first, tell us the circumstances here. Where were these players being interviewed, and how did the issue of sexual orientation even come up?

FATSIS: Well, the questioning occurred at the NFL’s annual combine in Indianapolis, which is a kind of meat market where college prospects work out before the league’s draft next month. In addition to your running and jumping and lifting, players are also interviewed by team officials. One player, a tight end named Nick Kasa from the University of Colorado told a radio station in Denver that he was asked: Do you have a girlfriend? Are you married? Do you like girls? A couple of other players said the same thing. Now, the NFL responded that teams can’t do that. It’s against league policy and also against laws in certain states.

CORNISH: Now, the issue of sexuality also reportedly came up this week, this time in connection with Manti Te’o of Notre Dame. Of course, he’s the player who was the apparent victim of that elaborate hoax in which he had a fake girlfriend.

FATSIS: Yeah, Whom Te’o talked about as a source of inspiration after her alleged death but who turned out to be a man. And this also occurred at the combine in Indianapolis. And the well-sourced Mike Florio of “ProFootballTalk” reported that Te’o sexuality was the elephant in the room and that teams want to know if he’s gay. Te’o had told Katie Couric that he isn’t gay. And the reasoning behind this line of questioning goes like this: teams want to know how their locker room would be impacted by a gay player and what they might have to deal with if a player came out.

CORNISH: And, of course, in the U.S., no active players in the NFL or other sports – baseball, basketball, hockey – have come out during their careers. But an active soccer player did come out recently. His name is Robbie Rogers. He’s an American, but he was playing in England. Tell us more about him.

FATSIS: A very good soccer player. Rogers had played 18 games for the U.S. men’s national team. He had played in Major League Soccer, the U.S. league. He moved over to England and was with the second division club Leeds United, but he had a series of injuries. And a couple of weeks ago, he announced in a blog post that he’s gay and he is stepping away from the sport. And the support for Rogers has been unlike anything I’ve seen in sports: a flood of tweets from players, even a video made by coaches and players for the Seattle Sounders of Major League Soccer.

And I think that’s significant. One way top leagues can ease the road for an openly gay male athlete, and I say male because there are out lesbian athletes in team sports, one way they can ease the road would be if the message came from the top, from teams and leagues and league commissioners.

CORNISH: Is there anything else that would kind of change the culture here?

FATSIS: Well, things are changing. Chris Kluwe of the Minnesota Vikings and Brendan Ayanbadejo of the Baltimore Ravens of the NFL filed an amicus brief calling on the Supreme Court to overturn California’s Proposition 8 that bars gay marriage. Kobe Bryant of basketball’s LA Lakers recently chided a fan on Twitter for using the word gay as a putdown, and that’s just a couple of seasons after Bryant made an anti-gay slur on the court himself.

I think the climate is shifting more toward what former NBA star Charles Barkley said not too long ago: I’d rather have a gay guy who can play than a straight guy who can’t play.

CORNISH: Stefan, thanks for talking with us.

Copyright © 2013 NPR. All rights reserved. No quotes from the materials contained herein may be used in any media without attribution to NPR. This transcript is provided for personal, noncommercial use only, pursuant to our Terms of Use. Any other use requires NPR’s prior permission. Visit our permissions page for further information.

NPR transcripts are created on a rush deadline by a contractor for NPR, and accuracy and availability may vary. This text may not be in its final form and may be updated or revised in the future. Please be aware that the authoritative record of NPR’s programming is the audio.