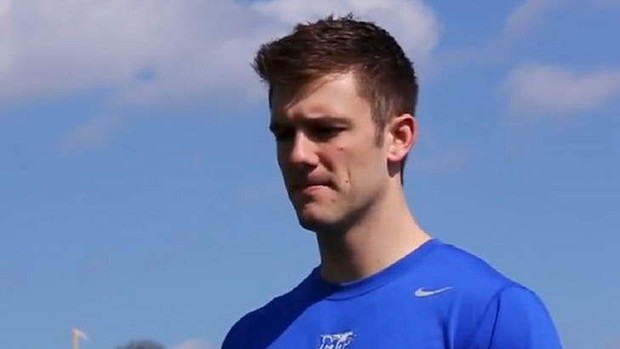 Alan Gendreau would seem an unlikely pioneer. He is a former kicker for Middle Tennessee State, the leading scorer in Sun Belt Conference history, a little-known 23-year-old who wants a shot at the NFL.

And he is gay.

Recent attention on the sooner-or-later milestone of an openly gay male athlete in a major U.S. team sport has been spurred by a presumption: that the first will be a current professional athlete.

But those who have tracked the issue have thought the more likely situation would involve an already out athlete climbing through the college ranks to reach the NFL, NBA, NHL or Major League Baseball.

They thought it would be someone like Gendreau. And it might be, if and when he can secure an invitation to try out for a team in the coming months.

Gendreau’s motivation is not to become the first openly gay player in the NFL. It is simply to play in the NFL.

“I’m a kicker that happens to be gay,” Gendreau said Tuesday. “It’s a part of who I am, and not everything I am. I just want to be known as a normal kicker.”

Gendreau’s story was detailed in a substantial feature and video released Tuesday by Outsports, a website devoted to the intersection of gays and sports. Cyd Zeigler, a co-founder of Outsports who wrote the story, said Gendreau was not looking for a spot in history.

Gendreau has been openly gay since high school in Apopka, Fla., and he did not disguise his sexuality when he arrived at Middle Tennessee State — which might have led to notice as the first out player in major college football, had anyone noted the historic cultural relevance.

As a freshman in college, Gendreau told his story to Outsports. But he did it anonymously, concerned about the effect the disclosure would have on his family and afraid that it might hurt his NFL prospects.

“My whole thing in this is just to help anybody who is struggling with coming out,” Gendreau said. “I want people to know that I didn’t have a problem with it, and they shouldn’t, either.”

Zeigler long worried that prejudice toward homosexuality would diminish an athlete’s chances of playing in a major U.S. team sport. Now he is optimistic that it will have no bearing on Gendreau, an indication of how quickly society’s views have changed.

“NFL teams will do whatever will win games,” Zeigler said. “I don’t think being openly gay hurts or helps him. It might hurt him with one NFL executive or help him with another. But it won’t determine whether he gets a job.”

During his sophomore and junior seasons, on the way to back-to-back bowl berths for Middle Tennessee State, Gendreau made 28 of 34 field-goal attempts, the longest from 55 yards. As a sophomore in 2009, he kicked a game-winner as time expired against Maryland and was one of 20 semifinalists for the Lou Groza Award, given to college football’s top kicker.

As a senior, in 2011, Gendreau missed four of his first five kicks — a potential tying 47-yard field goal on the last play of the season opener at Purdue was blocked — for a team that went 2-10. Interest in his skills waned, despite a strong second half of the season, and Gendreau was lost among the sea of kicking prospects vying for 32 NFL jobs.

“I took that as my sign to hang it up,” Gendreau said.

He has spent most of the past year living in Washington as an assistant at a real estate firm. Last summer, he coached at a football camp, where other coaches saw him kick and encouraged him to continue pursuing his dream of playing in the NFL.

“I’m not in the NFL,” Gendreau said. “If that were to happen, I’d love to be that role model to anybody struggling. I know that’s a lot of pressure, but that’s the life of a kicker.”