It’s not hard to figure out why surf films feature heavily in the Byron Bay Film Festival each year. While the love of waves and the water is a universal theme, a number of films on the 2014 program steer away from surf culture stereotypes.

Every good surf film features beautiful breaks and those on an adventure to ride them.

Several that are screening at this year’s BBFF also use the genre to delve into environmental concerns and to tell some of the not-so-obvious stories of people who make up the surf world.

OUT IN THE LINE-UP

The premise for OUT in the line-up began with one Byron Bay man searching two words in Google… gay and surfing.

He stumbled upon a website dedicated to the gay surf community.

“I had never met any other gay surfers in my life,” says David Wakefield, a one-time state surf champ.

“Obviously when you’re surfing, that’s the last thing on your mind; whether someone’s straight or gay because you’re just out there surfing, but I wasn’t sure why I’d never met any before.”

A documentary by gaysurfers.net founder Thomas Castets and filmmaker Ian Thomspson, OUT in the line-up follows David’s journey to uncover the taboo of homosexuality in surfing.

“Going around the world interviewing other surfers and ex-pro surfers, a lot of surfers say that they really can’t come out because they’re discouraged to come out either for fear of sponsors dropping them or for fear of not getting any publicity.

“I think that within the surfing stereotype, that sort of macho kind of thing, it’s not a sport that people are that happy to come out to other surfers in.”

Winner of Audience Award for Best Documentary at this year’ Sydney Mardi Gras, the film explores different peoples’ stories and aims to start the conversation in surfing and those in professional surfing about the fear of being openly gay.

OUT In The Lineup screens on Friday 7 March at 7.30pm. 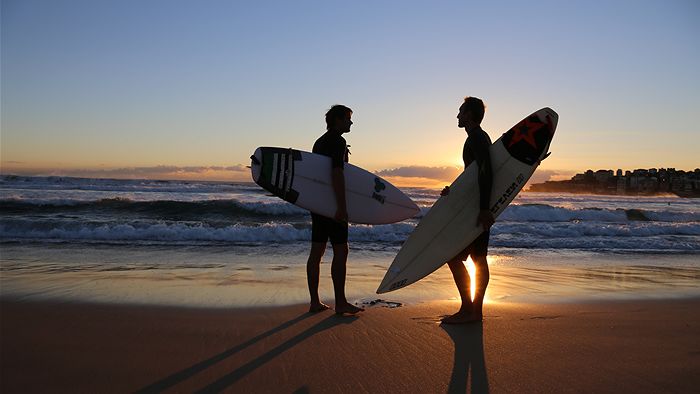 Years on, the Byron Bay surf program named Burra Jurra, which in local Aboriginal language means ‘ocean’ or ‘seashore’, is about far more than riding waves.

“It’s brought them out of themselves… and if I talk to Yvonne about it, she says, now that it’s called Burra Jurra they’ve taken ownership of the program, they’re proud to be there, so it’s like they’ve lifted their head up,” Steve says.

Surf identities, who themselves have recognised the positive effects of a spiritual connection with the ocean, join cultural teachers to incorporate the sport with art, dance, life skills and story sharing.

This film by Juliet Carrington underscores the sport’s ability to drive social change and reconciliation.

“They see that ‘hey, these white surf coaches are cool’, we’re having fun, we treat them with respect and we get treated with respect back,” Steve says.

Covelong Point is located 40km south of Chennai, on the east coast of India.

For centuries, the people of this fishing village have led relatively simple lives.

Directed by Arturo Calveteis, the documentary tells the story of Murthy, a fisherman who finds a passion for surfing.

Against the colourful backdrop of India, the pressures of the port town and his village’s ancient culture, it captures Murthy’s determination to begin a surf school that inspires a new generation in south-east Asia.

WOMEN WHO RUN WITH THE TIDES

A short film about Lennox Head locals, this flick looks into the unique qualities and attitudes older women bring to the surf line-up and their take on the state of women’s surfing today.

Women who run with the tides screens on Saturday 8 March at 6.30pm.

OTHER SURF FLICKS IN THE DIRECTOR’S PICK

Nordfor Sola (North Of The Sun) documents the journey of two men who spend a freezing Norwegian winter on a remote arctic island. Inge and Jørn live in a cabin built out of driftwood and trash washed up by the sea, braving the bitter cold to surf some of the finest waves off this uninhabited land.

A Life Outside is the story of six New Jersey surfers who began surfing together in the 60s and pioneered the Casino Pier break.