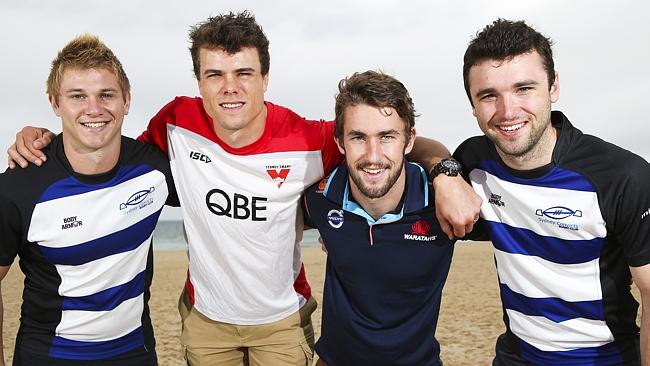 THE world’s biggest sporting codes are being challenged to follow Australia’s lead and make a collective stand against homophobia.

Heads of the AFL, NRL, Australian Rugby Union and Cricket Australia will come together in Sydney today to sign an unprecedented commitment to eliminate discrimination against gay, lesbian and bisexual players, coaches, administrators and fans in their sport.

The world-first initiative is the brainchild of organisers of this year’s Bingham Cup, the world cup of gay rugby, and has garnered the support of Bill Pulver (ARU), Dave Smith (NRL), Andrew Demetriou (AFL), David Gallop (FFA) and Ben Amarfio (CA).

Bingham Cup president Andrew Purchas said he was surprised at how willing the codes’ bosses were to join forces but was hopeful their unity would send a clear message to sporting chiefs across the globe.

“These guys compete against each other in terms of sponsors, players, TV rights, money and eyeballs, but they see this issue as more important than any code rivalry and they’re willing and prepared to make some systemic and fundamental change,” he said.

“We think there’s a real opportunity for sporting codes around the world to take a leaf out of their book and actually come together and do something collectively.

“With respect to the US, they’ve probably had more current gay athletes come out in their major four sporting codes than Australia has.

“The heart of the problem is the nation is significantly more divided on this issue than we are.

“I think our sporting leaders are taking the right step in this regard ahead of our political leaders.”

One of the world’s leading anti-homophobia charities, You Can Play, is in no doubt that the “historic milestone” will motivate global change.

“We’re confident that professional sporting organisations around the world will closely watch the work being done in Australia,” said its American-based president Patrick Burke.

In signing the commitment, the five sports agree to implement policies in line with the newly-created Anti-Homophobia and Inclusion Framework by the end of August.