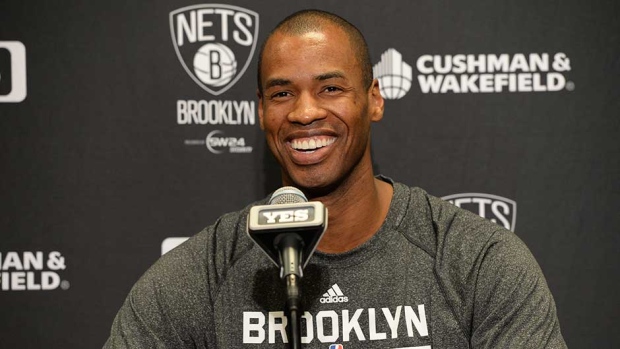 Jason Collins of the Brooklyn Nets speaks with the media prior to a game against the Chicago Bulls at Barclays Center on Monday, Mar. 3, 2014 in Brooklyn, New York. (Credit: Jim McIsaac)

EAST RUTHERFORD, N.J. – Jason Collins was a little surprised when he woke up Thursday morning. Collins, the first openly gay athlete to play in one of the nation’s top four professional sports leagues, learned that he had been named one of Time magazine’s 100 Most Influential People.

Beyonce graces the main cover and the Nets’ veteran big man is one of three people featured on one of the issue’s three inside covers along with Robert Redford and General Motors CEO Mary Barra. distinguishedBeyonce is married to former Nets part-owner Jay Z.

“It’s a really prestigious honor,” Collins said after practice Thursday. “I’m really thankful to the people at Time for putting me on the list . . . It’s a cool honor, but I know I’m not just doing this by myself. There have been a lot of people who have helped me get to where I am, a lot of people who have made the path easier for me, and that’s the one thing I hope I’m doing for other people is making it easier for them to live their authentic life.”

The article touching on his story was written by Chelsea Clinton. Collins chuckled when asked about the author, whom he knows from their days at Stanford and still speaks to on occasion. In fact, just before he revealed his sexuality last year, Collins sought Clinton’s advice on living in the public spotlight. So imagine his reaction when he saw her byline. “Yeah, it was really cool,” Collins said.”I texted her this morning and, because obviously we talk every now and then, and was like, ‘How did you . . . ?’ She kept it a secret from me. Although my sister-in-law, my brother’s wife, she did know, and my sister-in-law is good at keeping secrets as well.”

Kevin Garnett isn’t expected to play much more than the 20.5 minutes he averaged during the regular season. “No, his minutes are going to be around the same as they’ve been all season,” Kidd said. “We’ve got quite a few guys at the ‘5’ so we can keep rotating. Again, he feels good, so the minutes could go up slightly, but not to where you guys would like to see.”

Garnett wasn’t about to get into any discussions about his court time. “I’m not in here talking about minutes,” he said. “J-Kidd is the coach. If you want to talk about minutes, you talk with him. I don’t put myself in and out of the game. I feel OK. I feel strong enough to play, and that’s where we are at.”