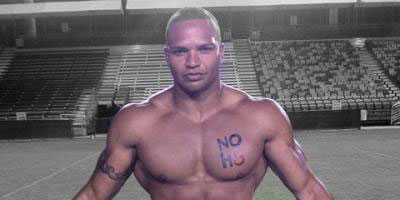 The National Football League star and LGBT rights champion believes the percentage of gay people playing the game professionally is less than found in the general population.

‘My theory after playing in the NFL for so long is that there are certain traits NFL players have and don’t have,’ he told Fox Sports.

‘Now, if there’s a negative thing about NFL players, we tend to be angrier (than non-players). We clearly have higher testosterone because you have to genetically to play this game. With that comes bipolar (disorder), split personality and certain negative things. That’s not everybody, but I think the rate is higher than the general population.

‘I believe that there are not as many gay people in the NFL as in the regular population. This is a discussion I’ve been having on Twitter for quite some time now. Some people say, “You’re stupid.” But even though there is not yet a proven gay gene, I believe people are born gay. It is a natural phenomenon.’

He added that he believed the number of gay NFL players is ‘minute’.

‘I could be completely wrong, but I’ve played for so long and so many others have. When you hear players coming out that are retired, they are few and far between.

‘Why wouldn’t we hear about more players if it’s the same percentage like in the regular population?’

In 2009, Ayanbadejo became one of the few athletes in a major sport to stand for marriage equality.

The player has two children with a girlfriend and has been applauded by gay rights groups for standing up in a sport that is well known for its conservative culture.