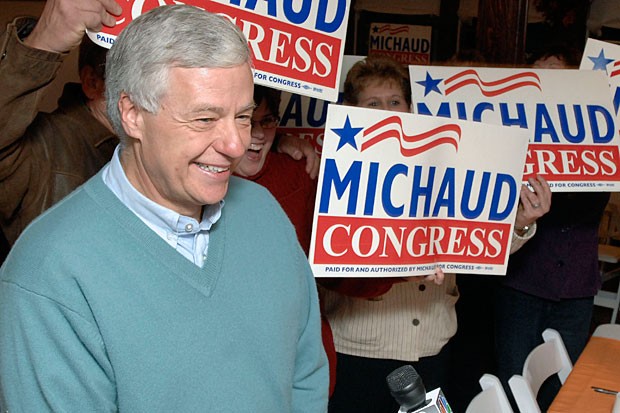 Michaud, a Franco-American Catholic, said he was pushed to do so by “whisper campaigns” begun as a response to his gubernatorial bid.

“They want people to question whether I am gay. Allow me to save them the trouble with a simple, honest answer: “Yes, I am. But why should it matter?” Michaud wrote. “That may seem like a big announcement to some people. For me, it’s just a part of who I am, as much as being a third-generation millworker or a lifelong Mainer. One thing I do know is that it has nothing to do with my ability to lead the state of Maine.”

Michaud is a mill worker-turned-politician known for his soft-spoken nature and as a champion of veterans and union workers.

“Whether I was punching a time clock at Great Northern Paper Co. for 29 years, serving the people of Maine in the state Legislature, or fighting for our nation’s veterans on the Veterans’ Affairs Committee, my personal life has never factored into how I do my job,” he wrote.

Michaud announced earlier this year he would challenge Republican Gov. Paul LePage in the 2014 gubernatorial race. Independent candidate Eliot Cutler is also running. A press release from Michaud’s campaign said questions about the congressman’s personal life had ramped up.

“By addressing this issue in a straightforward and honest way, he’s showing that he’s a statesman and a strong leader; he believes that Maine voters will base their decision on a candidate’s experience, ideas and integrity,” said David Farmer, a senior adviser for the Michaud campaign in the release.

“Mike is running a positive campaign built around the idea of bringing people together – Democrats, Republicans, Greens and Independents – to solve problems and get Maine back on the right track. And he’s not willing to compromise his values, which means treating all people with dignity and respect.”

While Michaud said in 2004 that marriage should be between one man and one woman, he has consistently supported civil unions and opposed constitutional bans on gay marriage. He opposed the Employment Non-Discrimination Act, which would have outlawed firing workers for being gay, but because he said it didn’t cover transgender people and therefore did not go far enough to protect all workers. Similar legislation is currently being considered by the Senate.

Maine passed a same-sex marriage law in 2012 after a similar effort in 2009 failed.