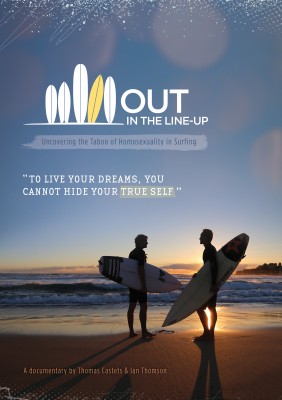 After 20 years of silence, former state champion surfer David Wakefield feels ready to reveal a secret that could turn his life upside down. He is gay. At the same time, on the other side of the world, Thomas Castets is setting up the world’s first online community for gay surfers. The two meet and for the first time David connects with someone who understands the burden he has carried for so long. Thomas encourages David to confront his fears of rejection and David comes out at the Sydney Mardi Gras parade, receiving some unexpected media attention. Despite mixed reactions from friends and family, David is determined to find out why homosexuality is so hidden in surfing. He quits his job, packs up his house and joins Thomas on a global journey to bring understanding to this taboo topic.

“OUT in the line-up” follows David and Thomas from the east coast of Australia to Hawaii, California, Mexico and the Galapagos Islands as they meet and surf with people from all corners of the surfing community: from an openly gay three-time world champion, an award winning big wave rider, and former US Congressman to everyday surfers, gay and straight. Throughout their travels David and Thomas hear stories of fear, isolation and self-doubt, but are also inspired by tales of hope, self-empowerment and transformation. As their journey unfolds, David and Thomas hope to create change in surf culture, looking to the surfing’s grassroots values of freedom of spirit, open-mindedness and love for the ocean.

Two Sentence Synopsis (41 words)
Two gay surfers embark on a global journey to uncover the taboo of homosexuality in surfing. They become part of an emerging community prepared to step out of the shadows of secrecy and create a more open and accepting surfing culture.

82 words Synopsis
Two gay surfers unite to uncover the taboo of homosexuality in surfing. Together they embark on a global journey to speak with people from all corners of the surfing community about an aspect of surf culture that has until now remained hidden. As their journey unfolds, they uncover a culture of fear, secrecy and exclusion but are inspired to affect change by connecting people, provoking discussion and looking to the sport’s grassroots values of freedom of spirit and love for the ocean.